A Day in Naples and How to Spend It

There is no describing the feeling that washes over you once you step foot in a city that’s been a cultural hub ever since the Renaissance. Naples, one of the oldest continually inhabited cities in the world, can offer you a whirlwind of experiences – even if you have only one day in Naples to spend.

Often called a museum in the open, this city’s center is the largest UNESCO listed World Heritage Site in Europe. The historic relevance of the city is only enhanced by possibly the most famous ruins in the world – Pompeii.

What to do in Naples, Italy is a question with many an answer, but here are some sights you shouldn’t miss:

Dedicated to Our Lady of the Assumption, the Naples cathedral is an imposing structure, built between 1272 and 1315. While its original Gothic style survived centuries, it’s been reconstructed and renovated, so the ones with discerning eyes will note several other architectural styles scattered throughout.

Inside you can find 4th– century mosaics, Giovanni Lanfranco’s fresco, and even witness a miracle! The church keeps the blood of the city’s patron saint, San Gennaro, in a little flask. Twice a year, in front of the crowd, the blood is said to liquefy. And so – if you’re among the lucky ones – you might witness the Miracle of Saint Gennaro during your day trip to Naples.

Like any old and grandiose city, Naples has its secrets too. Often overlooked by visitors, you shouldn’t miss out on taking a walk in the city’s underground.

Many of Italy’s cities are built on older cities – Naples is, of course, no exception. You can take a walk in the Roman forums, Roman markets, the homes of ancients Greeks and Romans right under Naples’ surface. The 90-minute expedition will present you with the gift of walking through centuries of human civilization.

To properly experience Naples in a day, head on over to one of the restaurants and enjoy authentic Italian cuisine. Whether you’re a gourmand or not, it’s hard to make an excuse not to eat the most popular dish around the world, which originates from Naples – pizza.

Located in the very heart of the city, this square serves as the symbol of Naples. Wherever you look, you’ll find buildings of great importance, from the royal palace to the church of San Francesco di Paola.

Until the 17th century, this was an irregularly shaped site, mostly used for folk festivals. It was then that the Royal Palace was constructed, which turned the square into a more grandiose and more important place. Look closely at its facade and you’ll see a number of statues. These are the eight Kings of Naples. Of course, you can step inside and take a walk among many artworks and ornaments, that once greeted Naples royalty. The Throne room, Court Theatre, Royal apartments, and the queens’ personal chapel are just some of the sights you’ll experience inside.

The Church of San Francesco di Paola was constructed by the will of Ferdinand IV as his gratitude to the saint, who, he believed, interceded to restore the Bourbon crown. Two more buildings decorate the square – the Salerno Palace (the private residence of Prince Salerno), and Minister’s Palace, now called Prefecture’s Palace.

If you find yourself there at Christmas, you’ll find Piazza del Plebiscito transformed into a place of exhibition for modern art. 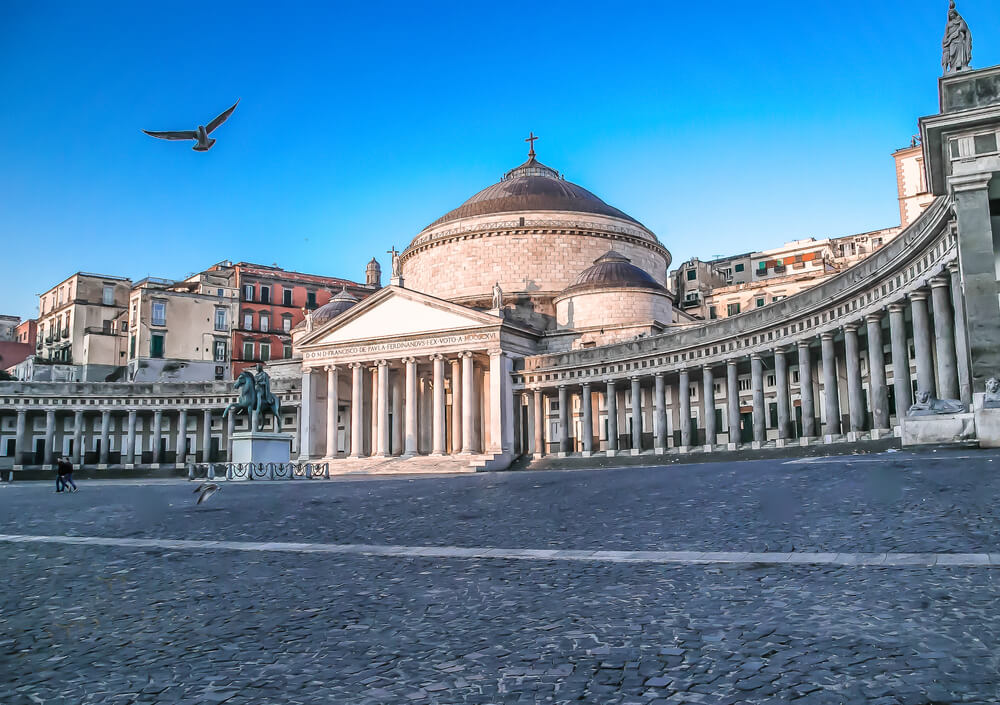 If you’re still wondering what to do in Naples, head over to the Galleria Umberto I and relax with some shopping. Built between 1887 and 1891, this shopping gallery had a significant part in Naples’ “Risanamento” – recovery, renewal – in the decades before World War I.

Crowned with a glass dome braced by 16 metal ribs, and designed to be filled with cafés, exclusive shops, and a place for the whole city to congregate, the Galleria won’t leave you indifferent.

Among the things to see in Naples, Italy are its castles, just some of its ancient wonders.

Castel dell’ Ovo (Castle of the Egg) is the oldest one. Built by the Normans in the 12th century, it still sits by the Naples’ seaside. The castle itself is still wrapped in legend. Virgil, a Roman poet who’d enjoyed a reputation of being a great sorcerer in the Middle Ages, put a magical egg into the castle’s foundations to support it. Legend says, as long as the egg is still intact, Naples is safe.

Another castle to note is Castel Nuovo, built at the end of the 13th century. This was the royal seat for the kings of Naples, up until 1815. Some of its notable residents include Giovanni Boccaccio, Pope Celestine V, and Petrarch.

Today, this castle is host to a multitude of cultural events and also home to the Municipal Museum. You can walk in its hallways and visit the Armor Hall, the Palatine Chapel, the first and second levels of the courtyard, and walk the same paths countless Kings have walked before you.

Twenty four hours can go a long way, and it’s here, in Naples, that you can use them to calm down the never-ceasing chatter in your mind. Each and every one of us deserves time to step away from their worries and immerse themselves in the world’s beauty and history. We can help you use as much of this time as possible, by offering you our top of the line chauffeuring services. Get in touch with us – our luxury cars and experienced, gregarious chauffeurs can help you experience Italy the only way you’d want to see it –  like true Italians.