Leaning Tower of Pisa Facts You Didn’t Know About

This bell tower, along with the entire square on which it stands, was built as a testament to Pisa’s strength as a city. The building of the tower started in the 12th and was finished in the 14th century, and people kept building, even when they found the tilt persisted. At one point, it even leaned the other way!

Here are some more Leaning Tower of Pisa facts you can use to impress your traveling companions.

When was the Leaning Tower of Pisa built?

Construction of the tower was finished in the 14th century, more precisely in 1372 (or, some say, 1399). However, the process lasted for about two centuries!

The Leaning Tower of Pisa construction started in August 1173 but stopped fairly quickly after that. Several times, the building process was interrupted by wars, debt, and, of course, the terrible tilt. After a while, everyone dropped their tools and walked away. This lasted for 100 years.

In 1272, Giovanni di Simone offered a solution for preventing the pesky lean. Sadly, this did not work. The tower continued to lean, and after 12 years of hopelessly trying to correct it, the Pisans once again dropped their tools and walked away.

The final push towards its completion came in the 14th century, and the tower has been proudly standing, or rather leaning, since 1372.

Another interesting fact you may want to include in your arsenal is that the Leaning Tower of Pisa was closed between 1990 and 2001 in order to make it safer. It is now slightly rebalanced, much more secure, and you can pose holding it up without fear it might suddenly topple over. 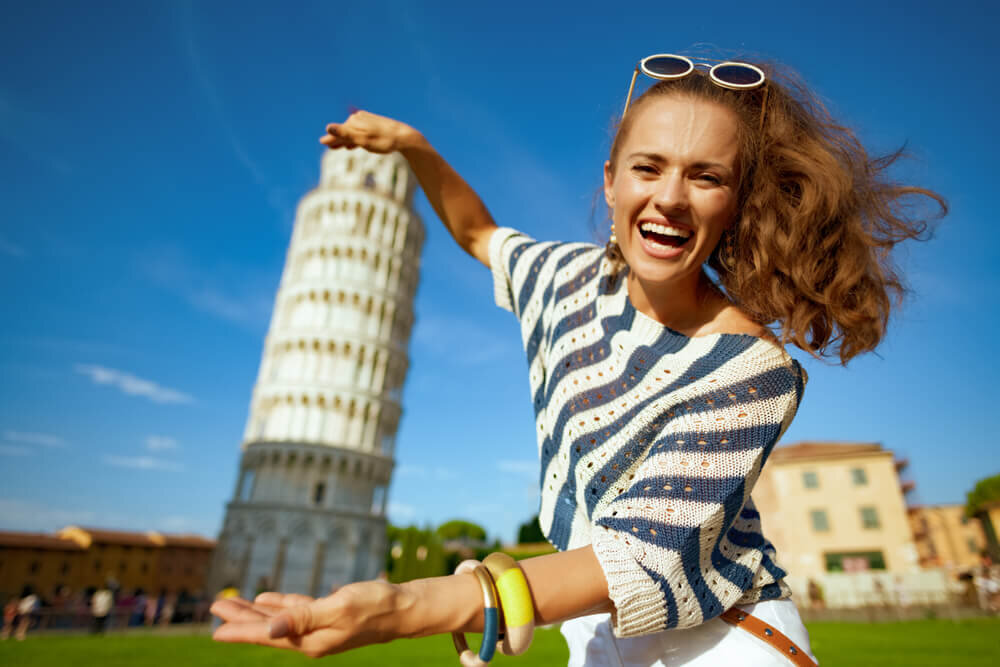 Who built the Leaning Tower of Pisa?

There really is no answer to who exactly deserves the title of lead architect.

Why was the Leaning Tower of Pisa built?

The reason for building the tower is at the same time simple and complex. It was supposed to be one of the shining jewels of Pisa’s crown, intended to exhibit the city’s strength, wealth, and authority.

In 1063, after a successful attack in the city of Palermo, the Pisans returned to their homes in glory – both metaphorical, and material. This glory was to be translated into a physical interpretation – a great Field of Miracles (Piazza dei Miracoli), that would consist of a cathedral, a baptistery, a cemetery, and a bell tower. The entire complex was a testament to Pisa’s importance as a city.

The tower, today’s Leaning Tower of Pisa, was supposed to be the tallest one ever constructed. It likely would have been, if only there was a tiny bit more foresight and planning.

Why does the Leaning Tower of Pisa lean?

The causes of the inimitable lean are twofold – a lack of proper planning and good luck. While the lack of planning caused the imbalance, it was good luck that prevented the tower to topple over.

What happened? Well, the land beneath the tower was weak – it consisted of a mixture of kind of clay, fine sands, and shells that was far too weak to support a tower of such great proportions. Another (arguably preventable) error was that the foundations themselves were only about three meters deep. This didn’t seem like much of a problem until 1178 when the builders reached the second story.

By now, the lean was visible, and perhaps it was pride that urged the Pisans to move on and continue with the construction works. The builders tried to rebalance the tower by adding arches and taller columns, but to no avail. When they reached the 4th story, the south side arches were two inches higher than the arches on the left, and the leaning kept on happening. Construction finally halted – and this was when luck came into play.

During the 200 years of constant interruptions, some structural engineers claim that the soil had ample time to compress and settle. This would be the only reason why the tower kept leaning, and never toppling over.

When construction continued in the 13th century, the tower did not fall but it did, however, lean in a different direction. This happened because the engineers who tried to correct the tilt tried to build it straight up, but gravity came in the way – the gravity center was thrown off and the building leaned in the opposite direction. Eventually, as the building progressed, the tower settled to its previous position.

The story may seem over, but there was one more attempt at straightening the tower.

During his dictatorship, Mussolini regarded the tower as somewhat of an embarrassment to the nation, and even a source of great disgrace. His grand plan to fixing the previous architectural shortcomings went something like this: drill hundreds of holes in the tower’s base, stuff them with grout and mortar, and the tower would magically pull itself up. It was a horrible plan. The ultimate result was – you guessed it – a much heavier base that caused the tower to lean further than it did before.

Fortunately for us, the Leaning Tower of Pisa was not greatly harmed and is still standing (tilting) today! 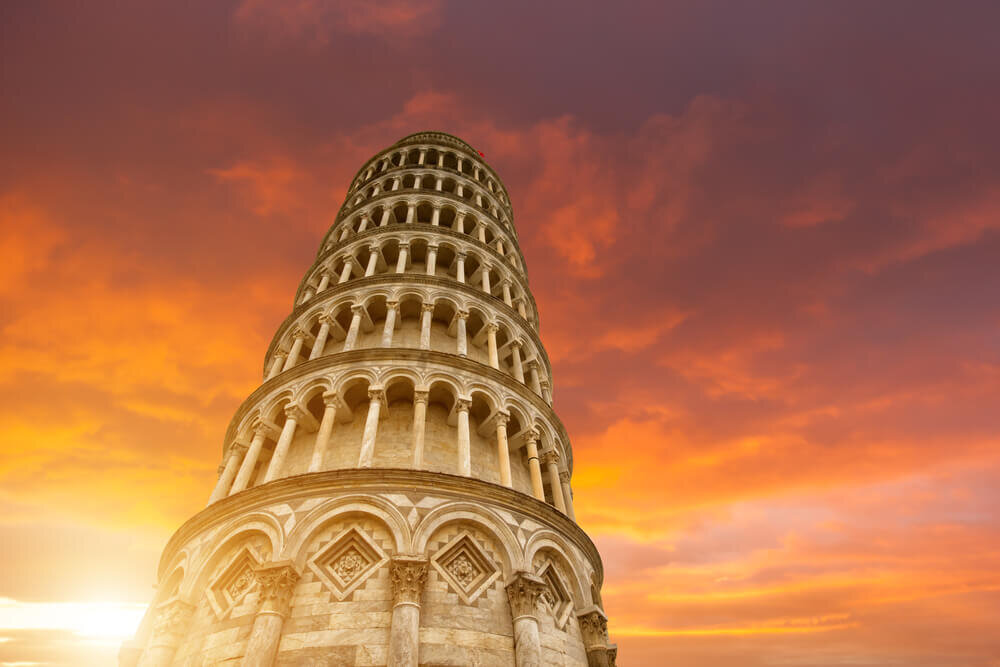 Can you go inside the Leaning Tower of Pisa?

Yes, this landmark with 296 steps on the northside staircase and a mere 294 on the south side is open to the public!

The danger of toppling and slowly sinking to the ground was prevented by many restoration and rebalancing projects, so it’s completely safe to get to the very top of the tower. There you will see not only the city of Pisa stretch out into the horizon, but seven bells as well. Regrettably, you will not hear them. Since the 20th century the bells haven’t tolled because, as you may have already guessed, many restores and engineers are worried that the noise and heavy movement might cause the tower to lean even further.
It is amazing how one relatively small tower can have such a rich history! And honestly, nothing can compare to seeing this magnificent building with your own eyes. If you want to explore the wonders of Tuscany while in a luxurious chauffeured drive, give us a call! With 17 years of experience behind us, we can provide you with customized transportation solution, with personal chauffeurs who can help you experience the true essence of Italy.