7 Places to Visit in Milan, Italy

Milan may be famous for its fashion shows, but if you only scratch at its surface, this city will uncover historical wonders and a collection of breathtaking art.

Whether you’re visiting for business or pleasure, your ‘what to see in Milan list’ may quickly become too long and too overwhelming. Still, there are some sights you shouldn’t miss!

Located in the Milan center, this behemoth of beauty took about 600 years to build. Construction first started in 1386, and though it was usable, the official year of completion is 1965.

The fifth largest Christian place of worship in the world, the Milan cathedral is decorated with an almost infinite number of statues. In total there are 3400 statues, 135 gargoyles, and 700 figures. To appreciate them fully, you should climb up to the terrazza. From there, you’ll be greeted with the magnificent view of Milan, and you’ll also be able to see the Madonnina – a golden-colored statue poised on the cathedral’s highest spire.

The Gothic style outside is rivaled only by the cathedral’s own interior. Finely detailed statues and a plethora of stained glass windows are truly breathtaking.

Take note of the little red light bulb just above the apse (the arch above the altar). Allegedly, it was on this place where one of the nails from Jesus’s crucifixion was placed. 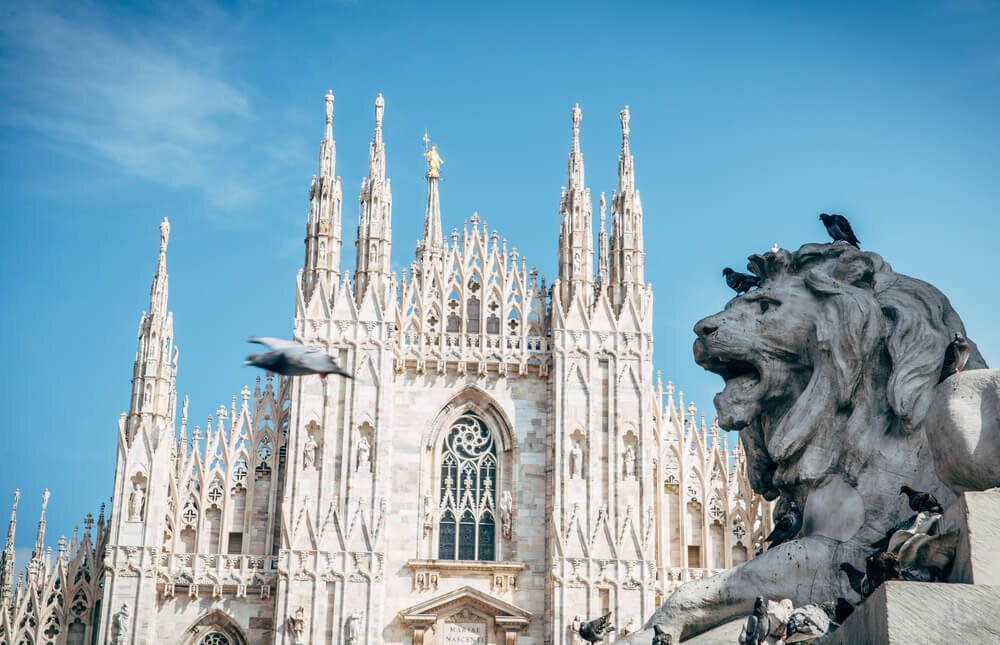 2. The National Museum of Science and Technology Leonardo da Vinci

Just one of many Milan points of interest is the largest and most important technological museums in the world. Spreading over 40000 square meters and housed in a 16th-century Olivetan monastery, this museum is a true treasure trove.

Inside, you can find an entire collection of da Vinci’s models reproduced from his sketches. Possibly the most impressive one is the aerial screw model. Reproduced here, it clearly is an antecedent to our helicopters. The Leonardo Gallery is, in fact, dedicated to the great inventor. There you can see his models and sketches until you reach an interactive workshop where you’ll be invited to use interactive models and try your hand in artistic techniques often used by Leonardo da Vinci.

Even if you’re not a fan of natural sciences, this museum is definitely an experience you shouldn’t miss!

The Basilica of Sant’Ambrogio was built in the 4th century AD (more precisely, in the year 379), and has not changed much since. During its close to two millennia lifetime, the church has gone through several restorations, until it took its final form in the 12th century.

Story has it that St. Ambrose himself built the church. Upon arriving to Milan, he found the local churches in conflict between Ananism and the Nicene Creed. Being a supporter of the Nicene side, St. Ambrose sought to help by both preaching and construction. He built several churches which served to symbolize the wealth and power of the Nicene faction.

Inside this particular one, mosaics and artwork abound. The most magnificent sight being the mosaic of Christ Pantokrator located on one of the domes, first painted sometime between the 4th and the 8th centuries.

Be sure to visit the Devil’s Colum. Located right beside the church, a white marble column with two holes tells a tale of the devil’s failure. They say that once he could not lead St. Ambrose to temptation, the devil got so incensed that he hit the column with his horns!

This fine art gallery is not merely a gallery; like many other buildings in Milan, it once had a different purpose. First it was a convent, then the seat of the astronomical observatory and the national library, until it was finally converted into a museum in the 19th century.

The gallery is home to some of the most influential works of art: Ruben’s Last Supper, Correggio’s Adoration of the Magi, Bellini’s Pieta, Raphael’s Marriage of the Virgin, and far too many others to count.

Located in the Palazzo Brera, near Piazza del Duomo, Milan’s foremost collection of Italian artwork is definitely worthy of a visit.

On the list of things to do in Milan, one item is surely reserved for shopping. As a fashion capital of the world, Milan takes its shopping seriously, and the opulence of the Grand Galleria Vittorio Emanuelle II proves it.

Designed by Guiseppe Mengoni, the galleria was created in 1877, which makes it one of the oldest shopping malls in the world. The building was, in fact, constructed in the celebration of the unification of Italy, so its luxury doesn’t come as such a surprise.

A passageway between the Piazza del Duomo and Piazza Della Scala, is, in fact, a gallery, with its walls decorated with intricate paneling and ornate artwork. The center of the gallery, called Ottagono, is dominated by an impressive mosaic that presents different parts of the world. This served as a symbol of celebration of Italy’s central place in the world.

Since its opening, the Galleria has remained the favorite place for strolls, window shopping, and even a place for demonstrations. Many prominent figures of the Milanese high society came to walk down its passages, including Giuseppe Verdi and the Futurists.

Of course, it being a shopping center, you can always hop into one of the many stores – Prada, Luis Vuitton, Versace, and many more luxury brands made the Galleria their Milanese home.

One of the imperious things to see in Milan is Castello Sforzesco, a castle build in the 15th century upon the ruins of a 14th-century fortification. Located close to the center of Milan, this castle is packed full with museums and an impressive courtyard.

During the 16th and 17th centuries, it was known as the largest citadel in Europe – which becomes immediately clear once you step inside its walls. Once the seat and the residence of the Duchy of Milan, today it’s open to the public and houses a multitude of museums.

At the front of the castle, you’re greeted by a number of battlements and a central guard tower. The castle was, in fact, a fortress. Coats of arms and impressive statues are scattered throughout.

When it comes to the museums you can visit, they include everything from the Museum of Ancient Art to the Antique Furniture and Wooden Sculpture Museum. The most significant one is Pinacoteca del Castello Sforzesco, an art gallery, where you can admire Michelangelo’s last sculpture (the Rondanini Pieta), as well as da Vinci’s Codex Trivulzianus manuscript. 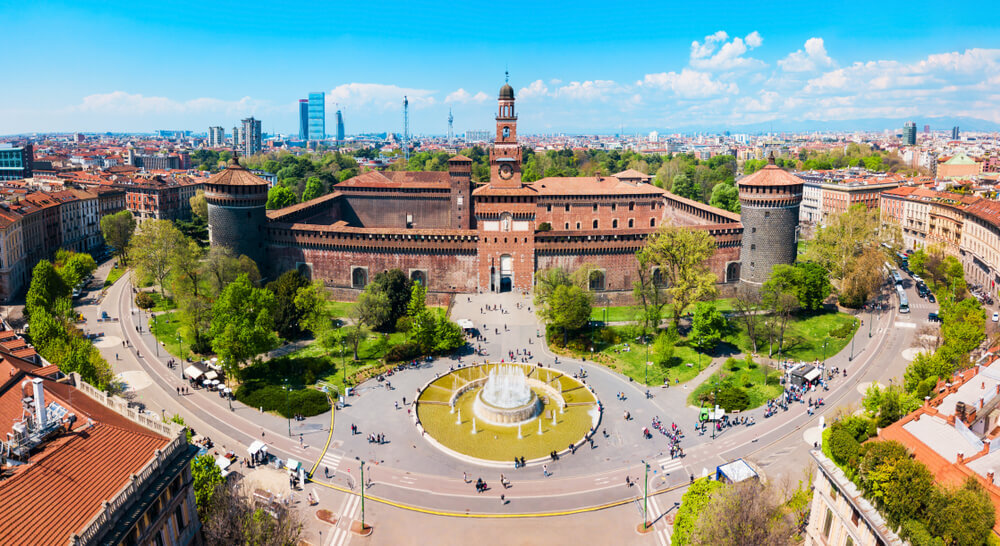 The thriving city center during the Middle Ages, Piazza Mercanti was once a hub of any and all merchant activity. Located between the modern Milan’s center, Piazza del Duomo, and Piazza Cordusio, the square is a perfect place for a stroll in history.

Each entry point to the square has held a name associated with a specific trade, from jewelers to milliners, since the 13th century. Though it has lessened its size, the square’s kept its splendor. Today, you can still see governmental building and palaces on its edges.

The Broletto Nuovo, constructed in 1233, is located at the north-eastern side and once served as the city’s administrative headquarters. On the south-western side, you can find the Gothic the Palazzo delle Scuole Palatine – the notary’s palace – standing proudly since the 15th century. On the south-eastern side, you can see Loggia degli Osii, constructed in 1316. This was another administrative seat and the parlera – the balcony from where the rulers addressed the populace – can still be seen.

Aside from a myriad of magnificent statues scattered along the square, you may also notice a pit in its center. The pit itself was made in the 16th century, while the pillars were added in the 18th. Somewhere around it, the famous Pietra Dei Falliti – the bankrupt’s stone – where the accused had to sit bare-bottomed while awaiting their sentence.
And we have only just begun! There are many more things to do and places to see in Milan, but we hope we’ve presented you with the most significant and the most interesting places to visit. The best way to experience a city that has a reputation of being luxurious is, of course, in luxury transportation. If you want to experience Italy the way only Italians know how, contact us. Our chauffeurs are well-versed in all things Italy, including many experiences and places only known by locals.