Sardinia, located south of the Italian mainland, is not your ordinary island. Magnificent nature, spellbinding beaches, and a charm no one can resist, make it one of the more unique places you can visit. If you’re planning a road trip and some quality time in Sardinia, here is a quick overview of what the island offers.

This island in the south of Italy boasts incomparable beaches, a relaxed lifestyle, and a vibrant, wholly unique local identity. This comes as no surprise – it’s an autonomous region of Italy and one of the geologically oldest landmasses in Europe. Once occupied by Phoenicians, Romans, Byzantines, and Moors, today the most present influences on the island originate from the Catalans of Aragon and the Spanish.

There is even some speculation that the lost island of Atlantis was, in fact, Sardinia. After studies of the ancient Nuragic population, some speculate the myth of Atlantis originated in the Barumini Nuraghe, large tower-shaped stone structures dating back to 1800 B. C, which are unique to Sardinia.

Sardinia is the only place in Italy without a motorway – which goes to show how appreciative the locals are of their natural surroundings and their way of life. It’s also a place with the highest rate of centenarians in the world – so if you want to try to uncover the secret of longevity, a vacation in Sardinia may just be the perfect time to start!

What to see and do in Sardinia

If you’re planning a road trip of Sardinia, you needn’t worry – you’ll be able to experience the Sardinian life at your own pace. When planning your Sardinia itinerary, make sure to leave some time for aimless wandering and just breathing in the fresh island air. In case you don’t have your own plan, we have prepared a 6-day itinerary for you:

Nuraghe Su Nuraxi is the most preserved of all the structures scattered through Sardinia. The central tower of this particular site dates back to 1500 B.C, while the outer towers were built sometime in the 11th and 12th centuries B.C. As we’ve mentioned before, these may very well be the structures that inspired many a myth about the lost island of Atlantis.

You’ll be able to see the towers up close – just climb the inside to its upper reaches and you’ll have a fantastic view of the dome, built by stacking stones without mortar. The 30-minute tour and English speaking guides can introduce you to this archeological marvel, but make sure to also visit the Casa Zapata Museum in the village, where you can feast your eyes on fascinating nuraghe artifacts.

Reached only by sea, these caves are named after the monk seals who often sought refuge among its walls. The caves are divided into two branches and contain a 17km (10,5 miles) long network of galleries. Adorned with concretion, lakes, and Neolithic petroglyphs, the Bue Marino caves are a fascinating piece of nature you shouldn’t miss.

Once you’re here, you shouldn’t leave without visiting some of the best beaches in Sardinia, Italy. Costa Smeralda, or Emerald Coast, is a hub for many of them. Located in the north-east part of the island, between Olbia and Palau, the coast boasts fine sand beaches and turquoise water.

One of the great beaches there is Capriccioli. Encircled by the Mediterranean bush and sheltered by the winds, it’s often a good choice for anyone who wants to lounge in shallow, calm and extremely clear waters. The Mediterranian flora, the iridescent sea and the Italian chatter in the background will lull you into a perfect state of bliss. 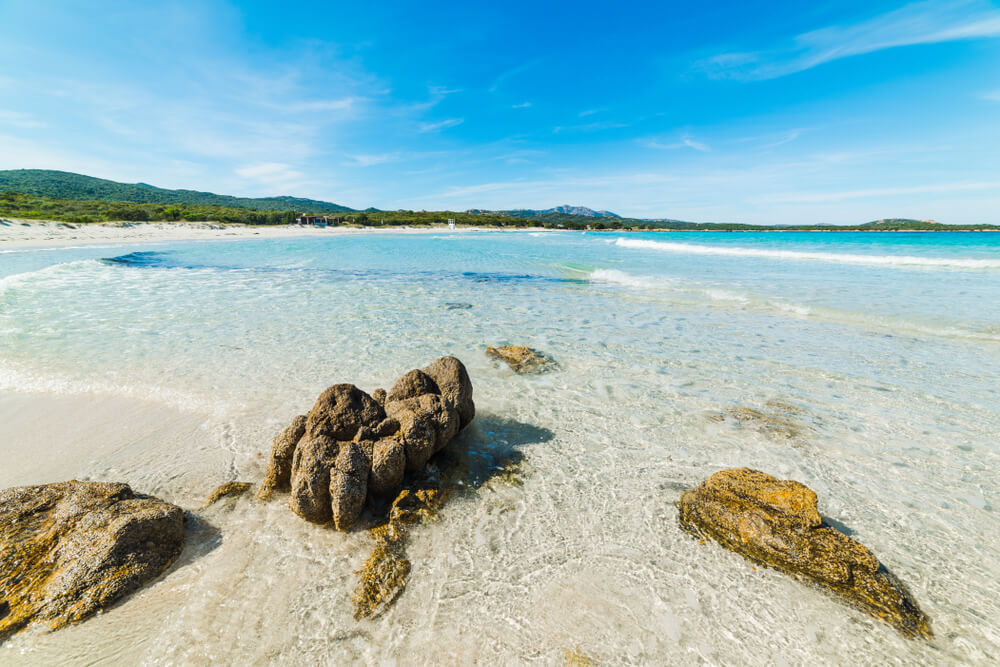 The preferred beach of Karim Aga Khan IV, the Arab Prince, was the Principe beach. He was one of the key people in the founding and popularizing of Costa Esmeralda in the 1960s, and some say, this beach was the reason. The Principe beach is widely acknowledged as one of the twenty most beautiful in the world, and with good reason. Known to native Sardinians as Portu Li Coggi, the Caribbean blue water is a result of the seabed granite. With its white, green, light blue, and emerald green-tinted stones, it almost looks like a fascinating naturally made mosaic. The sand itself is very fine – absolutely perfect for stretching in the sun.

If you’re an adventurous type, you should head to the La Maddalena island. Located near Palau, this jewel is full of bays, small coves, and enchanting beaches. There are no words fit to describe the feeling of being there – as though you were wrapped in a secret, enjoying the beauty of clear turquoise waters and greenery scattered over off-white rocks.

This town, located on the north-west of Sardinia, still boasts its unique identity. Don’t be surprised if you can’t recognize the spoken language there – it’s a variant of the Algherese, and may remind you of Spanish. An Aragon king gave fiefdoms to about 400 families back in the 14th century, and the culture those people brought with them has not disappeared. In fact, the mass in the church of San Francesco is still held in Catalan.

The Alghero cathedral is a bit younger, dating back to the 14th century. Built in honor of the Virgin Mary, the cathedral still boasts a Spanish Gothic doorway. Inside, you can enjoy all the features of the Renaissance style and many amazing artworks inside its many chapels. If you feel so inclined, you can even climb the bell tower and see the whole island stretch before you.

A picturesque town built in the 12th century still stands proud today. The town’s castle, Castello Dei Doria, was built by the Genoese family Doria; their fortified walls are still as strong as they were 800 years ago. Look closely and you can see the hinges of the massive doors.

Inside the castle, you can find a museum of basket weaving, which is one of the most important local handicrafts. Walk a little further, up among the battlements, and you’ll be greeted with a breathtaking view. Stretched before you will be this medieval city, the view of the coast, and the Gulf of Asinara.

Castelsardo is not, however, just a castle. Stroll down the lanes, the twists, and turns of the street, and at each corner, you’ll be greeted with one delight or another, including two churches worth your time. One is Santa Maria Delle Grazie, a small church squeezed between a rock and defensive walls.

Another is Castelsardo’s cathedral. Originally built in the Gothic style, it was remodeled in the 17th century with Renaissance and Baroque elements. Inside, by the main altar, you can see Madonna in Trono col Bambino, a painting by the 15th-century Maestro di Casterlsardo, whose other work is featured in the Museum Ampuriense in the crypt. 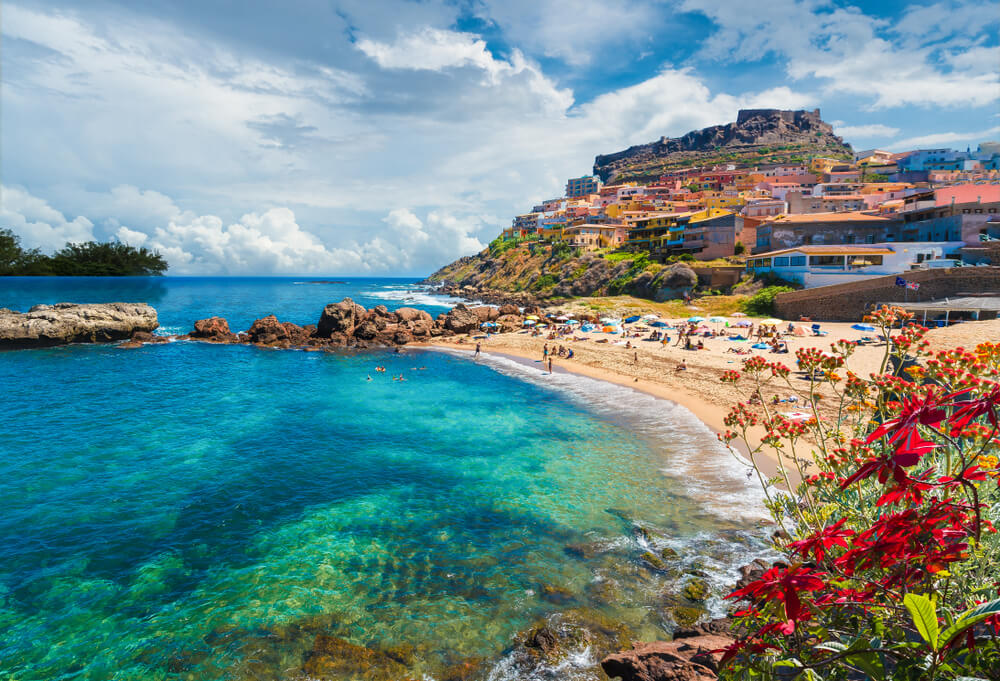 Discovered by fishermen in the 18th century, these caves are as marvelous now as they were three centuries ago. First formed two million years ago, the caves still stretch in vast halls, filled with stalactites and stalagmites, karst formations, and a huge underground lake. As if it was truly built by the old King of the Seas.

You can reach the cave by ferry, or take the Escala del cabirol – Roe deer’s steps, 654 steps on the western ridge of the promontory. Each cavern inside has a very descriptive name. The Palace Room holds within it 18-meter (59 ft.) tall columns rising to the vault and connecting to form spectacular arches that look like they’re holding up the ceiling. The Organ Room, or the Smith Room, holds the largest column in the grotto that resembles an organ pipe. The Lace Room is adorned with lace-like columns, while the Music Stand is a balcony overlooking the lake and the beach. This is by no means a place you should skip on your Sardinia road trip.

Whether you have 6 or 26 days, you won’t get bored in Sardinia. From its beaches to its roots in history, the island can help you let loose and relax. If you’re not the one to take care of bus schedules, and the thought of being bound by someone else’s timetable makes your stomach turn, we can help you travel in style. Contact us! Our luxury transportation solutions and meticulously selected chauffeurs will show you Italy the only way you should experience it – like a true Italian.